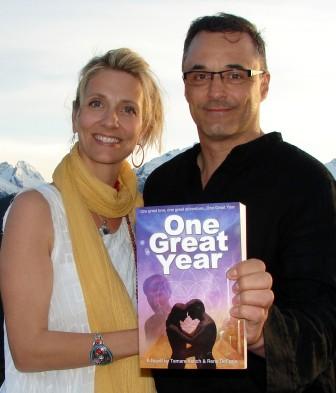 Tamara Veitch was awarded an “Empowered Writers Award” at the 2014 World International Peace festival in Vancouver.
.
Since an early age Tamara knew that she was a writer. She studied English and General Arts at Simon Fraser University and has had articles published in Guided Synergy Magazine, Awareness Magazine (Southern California), and Mosaic Magazine.
.
Tamara’s first published novel One Great Year was written in collaboration with her husband Rene DeFazio, and received excellent reviews. They are currently writing and researching the next installment in The Great Year Series.
.
Tamara is an experienced mural artist, teacher and public speaker and currently teaches creative writing to children ages 8-14 in her local community as well as touring and presenting the groundbreaking research and discoveries behind her novels.

Born and raised in the Vancouver area, Rene DeFazio is an actor, screenwriter and producer with numerous film and television roles to his credit, as well as countless commercials and print ads.
.
After spending many years backpacking and filming, Rene drew upon an abundance of unusual and exciting experiences to create One Great Year. His tireless research and firsthand knowledge of exotic locations, customs, sights and smells helped to bring this epic story to life.
.
Rene was awarded an “Empowered Writers Award” at the 2014 World International Peace festival in Vancouver.