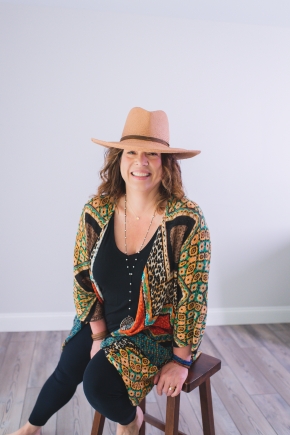 Karen C.L. Anderson has created a movement for brave women who struggle in their relationship with their mothers or daughters. Why brave? Karen’s work shifts a paradigm. It is often considered taboo to discuss the pain of dysfunctional mother-daughter issues outside of lofty clinical pathologies and personality disorders, unless, of course, it’s in a private support group where, often, the “support” ends up keeping women stuck in their painful stories, reactions, and patterns of behavior. In that traditional paradigm, affected women are stuck conveying “lesser versions” of themselves, which, ironically, is often what happens between mothers and daughters who have a failing or dysfunctional relationship.While on the surface it may seem like a niche issue, this work gets to the heart of self-actualization, gender equality, and intersectional feminism. She makes the connection between the micro (one mother/one daughter struggling) and the macro (internalized misogyny, toxic patriarchy, and the so-called Mother Wound, which is the pain of living one’s life as a woman in cultures and societies that do not value women and girls equally, an attitude that is too often passed down from mother to daughter).In her books, The Difficult Mother-Daughter Relationship Journal: A Guide For Revealing & Healing Toxic Generational Patterns (December 2019) and Difficult Mothers, Adult Daughters: A Guide For Separation, Liberation & Inspiration(March 2018), Karen shares not just her stories and hard-won wisdom, but also an empowerment process that challenges assumptions about the way things are and can be for women, not just within the context of their ongoing or historic relationships with their own mothers (who often model and foster ongoing disempowerment), but within the world at large.